Uruk
5000 Years of the Megacity

One hundred years ago, unique finds from an archaeological dig in the south of present-day Iraq sent shockwaves around the scholarly world. For the first time, archaeologists working at the site of the Mesopotamian city of Uruk, now Warka, brought to light testaments of the first known urban culture. To mark the 100th anniversary of the still ongoing excavation project, the Staatliche Museen zu Berlin's Vorderasiatisches Museum (Museum of the Ancient Near East) has joined forces with the Reiss-Engelhorn-Museen in Mannheim to present the major exhibition 'URUK - 5000 Years of the Megacity'. The exhibition is the result of the two museums' close collaboration with the Orient Department of the German Archaeological Institute (DAI) and the German Oriental Society.

This spectacular exhibition shines a spotlight on the genesis and flourishing of the first known city in the history of humankind some 5000 years ago, and its special importance for the ancient Near East as a whole. 'URUK - 5000 Years of the Megacity' will be on show from 25 April to 8 September 2013, at the Pergamonmuseum and from 3 November 2013 to 21 April 2014 at the LWL - Landesmuseum für Archäologie in Herne.

The excavation
After the German Oriental Society was granted the necessary license from the Ottoman Empire, German teams commenced excavation work in Uruk in November 1912. The turbulent political situation and ensuing military conflict soon put a stop to their endeavour, setting a trend that has sadly continued to affect work at the site repeatedly to this day. More than forty excavation campaigns have taken place so far in all. Even though less than five percent of the huge area that once made up the city has been explored so far, the current findings provide us with a wealth of details on the ancient Near-Eastern city of Uruk.

It was customary at the time to divide up finds from a single site and remove them from the country of their origin. This led to scores of finds making their way to Germany, where they were not only preserved at the Museum of the Ancient Near East in the Pergamonmuseum, but also at the DAI's Uruk-Warka's Collection, which is housed at the University of Heidelberg. Thanks to the unique cooperation of the four institutions involved in today's project, objects from long-separated collections will now go on display to the public under one roof for the first time. These artefacts will be joined by numerous valuable loans from major European museums such as the Musée du Louvre in Paris, the British Museum in London and the Ashmolean Museum of Art and Archaeology in Oxford, as well as by newly created digital reconstructions of both the ancient city's layout and several of its key monuments.

The exhibition at Berlin
The first stage of the show will be presented in a part of the Vorderasiatisches Museum's permanent exhibition in the south wing of the Pergamonmuseum. Since its opening in 1930, the Pergamonmuseum has been home to breath-taking reconstructions of the more than 5000 year-old clay cone mosaics that characterized the large architectural monuments that arose as a consequence of the burgeoning urban culture. As part of the major exhibition 'URUK - 5000 Years of the Megacity', these earliest examples of urban architecture will be presented along with newly produced virtual reconstructions.

Uruk – 5,000 Years of the Megacity: The Vorderasiatisches Museum Launches a Virtual Exhibition

Preliminary press conference for forthcoming major exhibition: Uruk - 5000 Years of the Megacity at the Pergamonmuseum 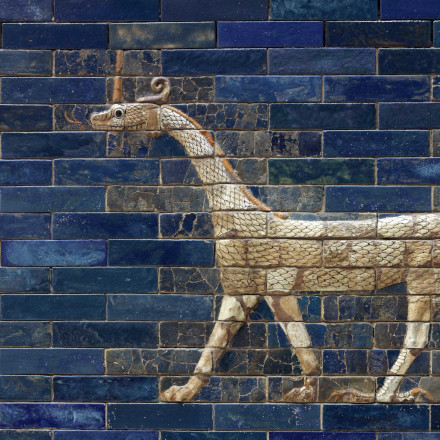 Virtual tour of the exhibition