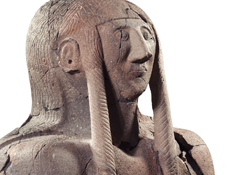 During an expedition in the Middle East in 1899, Max Freiherr von Oppenheim (1860-1946), heir to a banking family and diplomat from Cologne, unearthed the remains of a palace dating from the early 1st millennium BCE, on the Tell Halaf mound in what is today north-east Syria. Once the excavations were completed, most of the spectacular finds were brought to Berlin and were not - as originally intended - exhibited on the Museum Island, but were instead placed on display in a renovated machine plant in 1930. During the Second World War an aerial bomb destroyed the private museum and with it the unique sculptures housed within.

Nearly 60 years after the collection's devastation, one of the largest restoration projects ever got under way, which would ultimately lead to the reconstruction of the monumental stone sculptures and relief panels, pieced together from 27,000 fragments.

The exhibition gives visitors the first chance to experience the sculptures at first hand that were, until now, thought to be lost forever, as well as to discover more about their moving history.