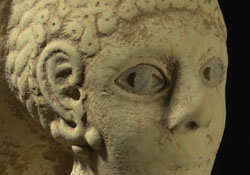 Faces of the Orient
Encounters with Early Jordanian Cultures

An exhibition of the Kunst- und Ausstellungshalle der Bundesrepublik Deutschland, Bonn, in cooperation with the Museum of the Ancient Near East, National Museums in Berlin

Jordan is part of the geographic region known as one of the world's oldest centres of civilisation. Located here is not only the beginning of the historic development of oriental civilisation, but also many of the cultural roots of western civilisation - a clear demonstration of Europe's strong affiliation to the Orient.

The exhibition 'Faces of the Orient - Encounters with Early Jordanian Cultures' can be seen as an introduction to the cultural history of the vast region of Jordan.

As well as the display of monuments from each historic era in human history, two sites listed as part of World Heritage, the nabataen city of Petra and the Museumsinsel, will meet.

In Germany the significance of Jordan first came into view with an exhibition in 1988 called 'Der Königsweg'. However, new important and astonishing results made during the last fifteen years of archaeological research should change our traditional views of the history of Jordan forever. At the same time these new insights constitute a connection between the ancient states and modern Jordan. It becomes clear that, for example, problems such as fast population growth, scarcity of water and of other natural resources existed then as now and are a permanent issue for the region.

The exhibition seeks to present everyday life in this multi-cultural region over a period of 10,000 years.

From the earliest recorded times, the area including today's kingdom of Jordan and connecting areas in the southeast have been a source of creative impulse for social, economic and religious life. That all three biblical religions - Christianity, Judaism and Islam - originated here is one proof. Moreover, the region also developed a mediating role between two sophisticated and powerful states, Egypt and Mesopotamia.

Differences in people's political, ethnical, cultural and religious background are still characteristics of life in Jordan. This diversity is a story which can be read even from the faces of the Jordanian people.

The exhibition is on view from April 8 until August 21, 2005 in the Kunst- und Ausstellungshalle der Bundesrepublik Deutschland, Bonn.