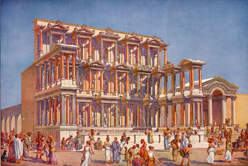 Zeiträume
Miletus in the Roman Empire and Late Antiquity

The exhibition presents selected artefacts from the Asian Minor metropolis of Miletus. On display are architectural structures, sculptures and inscriptions from the Collection of Classical Antiquities' own collection, with the newly restored market gate of Miletus in the hall of Roman architecture forming the heart of the exhibition.

The field work which has been conducted on the market gate and the Faustina baths since 2004 by the Collection of Classical Antiquities in conjunction with the University of Leipzig and the German Archaeological Institute, brings to light in exemplary fashion the transformation of a Greek-Roman city from the time of the Roman Empire through Late Antiquity up to the Byzantine Empire.

Numerous objects have been restored for the exhibition in the Pergamonmuseum which, for conservation purposes, were for a long time unable to be on view. The presentation, which has received support from the Berlin universities' Excellence Cluster TOPOI and the Verein der Freunde der Antike auf der Museumsinsel Berlin e.V., is rounded off with models and 3D reconstructions.