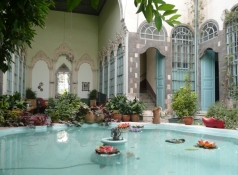 Approximately three-quarters of the Museum of Islamic Art’s entire collection - be it in the form of fragments of stucco decoration or ceramic vessels or their shards - originate from the homes once lived in by people. Houses and the things with which they are furnished are the material embodiment of the ephemeral everyday life of their inhabitants, as well as the mirror of their ambitions and world views.

This exhibition explores two central topics: how can objects of Islamic art be understood in the context of the world as once experienced by real people and thus serve as a way for experts or visitors to access the wider collection, (while also unearthing questions about the division and connection between art and ethnology as a result)? And what are the relations between the various lifeworlds of urban and rural populations as seen in the domestic architecture of the past and present day? Which social groups are reflected by the objects in our collection?
The gap between the town and country is also of interest to us from the perspective of the various speeds in which cultural development has taken place. In the 19th and 20th centuries the elite in Aleppino or Damascus liked to present themselves as modern, with clear European influences in their homes. In contrast, the rural population in north-east Syria, which only became permanently settled there about 100 years ago, attempts to maintain their nomadic traditions and adapt influences from an urban style of living to meet their own requirements. Objects from the museum’s collection that originate from the domestic sphere are displayed with images of the kinds of homes in which they appeared.