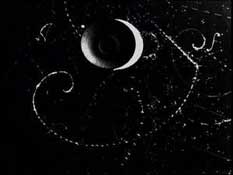 William Kentridge
Journey to the Moon

New acquisition from the Marx collection

Fascinated by the first science fiction film telling the story of "Le Voyage dans la Lune" (George Méliès, 1902), the contemporary artist William Kentridge creates, with his work of the same name, an hommage to the French experimental filmmaker Georges Méliès.
On nine screens, Kentridge transforms drawings on sheets of paper into scenes of bustling life. The strokes dance across the paper forming semantic consolidations in an ephemeral and surreal manner. His films act like documents of a long-gone time as Kentridge is not a maker of animated films in the conventional sense. In his films, he constantly strives to create his own art form which evokes the charm of the beginnings of cinema, the charm that was exuded by the Laterna Magica.