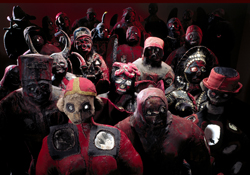 Vodou
Art and Cult from Haiti

Presenting about 350 objects for the first time, this exhibition gives a comprehensive insight into the world of vodou. The focus is on the Bizango, a vodou secret society whose objects were only to be seen by initiated members in Haiti, and thus hitherto concealed from any broader public.

The objects shown represent a selection from the collection compiled by Swiss-born Marianne Lehmann in Port-au-Prince in the course of the past thirty years. Her collection comprises about 3,000 vodou items. On 12 January 2010, Haiti was shaken by a devastating earthquake. The situation for the Haitian people is still disastrous. Despite being poorly sheltered, the Lehmann collection survived the quake largely without damage. It is planned to donate part of the entrance fees in support of the building of a cultural centre in Haiti, which is intended to become the new depository of the Lehmann collection.

The expression 'vodou' is understood as those religious practices, which are widespread in West Africa and were brought to America by African slaves. These practices form the basis of Afro-American religions, which were influenced by elements of Catholicism and indigenous beliefs. They include Candomblé in Brazil, the María-Lionza religion in Venezuela, Santería on Cuba, voodoo in the United States, and vodou on Haiti. The word 'vodou' derives from the Fon language in Benin and Nigeria and is equivalent to 'god', 'spirit' or 'sacred object'.

Some 80% of the ca. 8.5 million inhabitants of Haiti are members of the Catholic Church, while at the same time up to 90% believe in vodou gods and spirits, who are called "loa" (Creole: lwa). There are diverse forms of vodou in the different regions of Haiti, as its followers place importance upon very different elements, which are moreover constantly augmented by new features. Vodou is omnipresent in everyday life, in music and dance, in rituals and symbols.