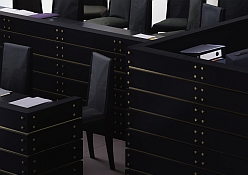 This extensive solo show is taken up by one of the most important themes in the artist's richly diverse body of work: Germany. The 40 or so works on display deal with social and historical events that have taken place in Germany, predominantly since 1945. It is no coincidence therefore that the exhibition also coincides with the anniversaries of two pivotal historical events in German history: the foundation of the Federal Republic of Germany 60 years ago and the fall of the Berlin Wall 20 years ago.

Thomas Demand's art transcends the generic constraints of the photographic medium. The artist (born in Munich in 1962) often culls his subjects from reports in the mass media, using them as the starting point to create expansive sculptures out of paper and cardboard which transpose the two-dimensional original into three-dimensional form. The artist then photographs these spatial (re)constructions made out of paper with a large format camera, before ultimately destroying them. Direct human activity, finer details and figures captured on film are not transferred from the original photographs into the life-size sculptures. What remains are phantom images of 'crime scenes' of missing events which often appear just as familiar to us as they are impalpable.

Demand's reconstructive handling of images that carry significance or appear to carry significance, focuses our attention on our reception of visual media and explores its influence on the structures of our memory. Accompanying the works in the exhibition are picture commentaries by Botho Strauß, created especially for the show which, rather than trying to give straightforward explanations of the works, open them up to new ways of interpretation as textual pieces in their own right.

There could hardly be a more fitting place for an exhibition which offers us a panorama of a nation's history than the great glass hall of the Neue Nationalgalerie of Mies van der Rohe. The building is not only an incunabulum of post-war architecture, but is equally historically significant as a symbol of the way the Federal Republic of Germany viewed itself at the former inner-city border.

The exhibition will be accompanied by a publication and an extensive, weekly series of lectures entitled 'How German is it?'. Each week, artists, politicians, scientists, film-makers, authors, sociologists, leaders of business and economists from both home and abroad will give a talk on aspects of German culture, society and history, using one of the works on display as their starting point.

The exhibition has been made possible by the Verein der Freunde der Nationalgalerie and is sponsored by E.ON.