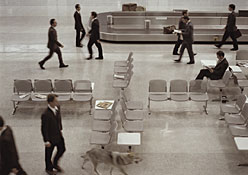 The Rape of the Sabine Women
Eve Sussman & The Rufus Corporation

With "The Rape of the Sabine Women", the Hamburger Bahnhof is showing for the first time a video installation by the British artist Eve Sussman, in which dance, photography and music find expression. The past and present play into one another in five acts and merge in an opulent tableaux. Based on the Roman myth of the same name, "The Rape of the Sabine Women", the piece goes beyond mere narration by attempting to transfer the central motifs of the Roman myth "power, loneliness, aggression and longing" to the present day. Ultimately, the 1960ies utopian ideal of a "better life by design" emerges as a countervailing force. What may initially seem to be paradox, finally caves in on itself and leads to anarchy and chaos.