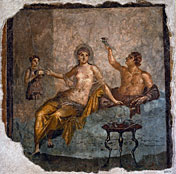 The last hours of Herculaneum

A co-operation between the Antikensammlung, Staatliche Museen zu Berlin, the Westfälisches Römermuseum Haltern and the Focke-Museum Bremen.

This exhibition presents new findings from excavations in Herculaneum and masterpieces from the National Museum in Naples, shown in Germany for the first time.

Ancient scrolls from the only Roman library with its original contents, from the world-famous Villa dei Papiri, rank among the most important exhibits. The exhibition also includes casts of well-preserved skeletons of inhabitants of Herculaneum. These, based on findings discovered in the boathouses, provide the first comprehensive record of the appearance, living habits and also the diseases of the inhabitants of the city.