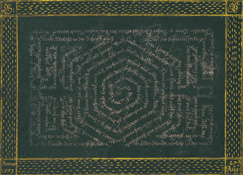 As part of the 'World as Words' season at the Kultforum, the Kupferstichkabinett is dedicating itself to examining the historic development of the phenomenon of 'text as image'. At the centre of the exhibition lie the pictorial roots of type design and layout in German art history since the High Middle Ages. The exhibition offers visitors an exciting insight into the diverse forms of script and type design and the overlapping roles of text and image up to the modern era.

For centuries, decorative initials in hand-written manuscripts and letterpress printing were the encapsulation and culmination of artistic ideas and forms of expression. The pictographies of the 15th century were also consciously designed works in their own right and were able to convey messages of an aesthetic, fashionable and sometimes even political nature. A playful streak has also always been present in script and type design. Alphabets containing human figures, plants and other themes served as copy templates for further use or as fanciful diversions in themselves. The calligraphic posters and tables of the writing masters were moreover not only used as models for documents and as teaching materials, but they also often found their way into cabinets of art or 'Kunstkammer' as individual artworks. Other exhibits, such as portraits in the form of labyrinths or poems are of such mysterious complexity that they demand great concentration on the part of the viewer.