[sound] Listening to the World

Sound reaches us directly, and yet it is fleeting. As a vibrant process of exchange it triggers deep emotions. Sound challenges and moves us – in every culture, and in every era. Our world is only revealed as a whole through vibrations, noise, tones, sound, music and speech.

Over the course of the last 140 years or so, a series of techn0logical developments have made it possible to record and play music – first with the help of wax cylinders, then shellack records and magnetic tape, and on through to MP3 files. But why were – and are – recordings made, using which technology, and under which conditions? How do sounds and musical styles spread across the world? How do we deal with sound as an immaterial cultural asset? Who do the sounds in recordings belong to?

The Phonogramm-Archiv of the Ethnologische Museum in Berlin, the Lautarchiv of the Humboldt-Universität zu Berlin and the AMAR Foundation in Beirut have joined forces to present the exhibition "[sound] Listening to the World", making it possible for visitors to hear and experience the fascination of sounds and the different approaches towards them.

Historical Sounds in the Archive

With the invention of the phonograph in 1877, a number of new opportunities also opened up for science and research. Ethnologists use modern technology to capture sounds, describe their specific meaning for a particular culture, and explain how they are spread. Such recordings will be collected and catalogued in the new sound archives which are under currently under construction. The project is driven by the desire to identify and compare cultures through recordings of language and music.

Who is allowed to record, preserve and utilize whose sounds? To what extent can dividing lines be drawn between individual music cultures? What unites the music of the Arab world collected by the AMAR Foundation, for example – does it stand for a specific identity?

Sound archives need to address such questions, particularly in the case of highly sensitive collections such as the recordings of the Navajo or of prisoners of World War I.

In late 2019, the Humboldt Forum will be bringing together two institutions that are famous throughout the world for their sound recordings: the Berlin Phonogramm-Archiv of the Ethnologisches Museum and the Lautarchiv of the Humboldt-Universität (HU). The exhibition demonstrates the huge potential of both collections by presenting a sample of their contents.

Featuring historical recording devices and media as well as several interactive exhibits, the exhibition begins with an introduction to recording and playback technologies. Historical sound recordings, artistic installations and objects providing background context all shed light on this exceptional scholarly project that investigates different cultures through their sounds.

Events throughout Berlin and the museum education programme

The questions raised by the exhibition will be addressed in greater depth and transferred to the present day and the city of Berlin itself – through soundwalks, film screenings, a conference, concerts and other formats. One issue which will be explored is the extent to which a culture can be identified via sound or language, for example – an issue which has been brought to the fore with the advent of speech and music recognition software such as MIR.

In the exhibition itself, blind and visually impaired visitors will be able to take advantage of several inclusive and accessible special features. All exhibition texts can be heard via a read-aloud function and are available in German in simplified language. The accessible Visitor Guide also presents audio descriptions of selected objects. Tours tailored to the needs of blind and visually impaired visitors will be available.

The exhibition "[sound] Listening to the World" has been organized by the Stiftung Humboldt Forum im Berliner Schloss jointly with the Ethnologischen Museum der Staatlichen Museen zu Berlin, the Humboldt-Universität zu Berlin, the Stiftung Stadtmuseum Berlin and the Kulturprojekte Berlin as well as with the AMAR Foundation in Beirut, and with the support of the Arab Fund For Arts and Culture AFAC. 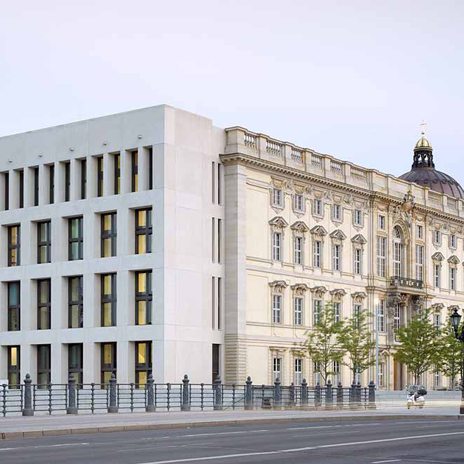