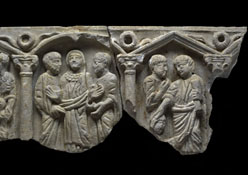 The Bode Museum is proud to present two separate fragments from collections in Berlin and Bonn of an ancient, Roman columned sarcophagus (dating from the mid 4th century A.D.) - two separate parts that together form a seamless match. The discovery that the pieces actually belong to each other was made during research in 1996. The two objects in question are both relief fragments, one from the Museum of Byzantine Art (Berlin) and one belonging to the Franz Joseph Dölger-Institut zur Erforschung der Spätantike (Bonn).

Now on view in Berlin, the two original fragments have been placed side by side, approximately a hand's width apart, allowing the fracture to become clearly visible. Behind the originals, visitors have the chance to see tinted plaster casts of the realigned fragments as they form a whole. The decision was taken to avoid having the original fragments themselves joined together so that the destruction of the original remains evident, while replicas depict the entire scene. An explanatory text goes into detail on how the once whole sarcophagus possibly came to be broken up, as well as providing insight into its composition, the themes depicted on it and their meaning.