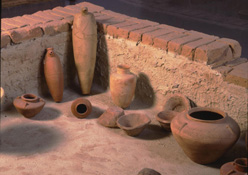 The Museum of the Ancient Near East has dedicated a memorial exhibition to Anton Moortgat (1897-1977) and his achievements in furthering the understanding of the cultures of the ancient Orient. September 2007 marked the 110th anniversary of the birthday of Moortgat, a curator of many years at the Museum of the Ancient Near East and the first full professor for the archaeology of the ancient near east in Germany. Anton Moortgat was also the first German archaeologist to have carried out renewed excavations in Syria in 1955. He thus laid the foundation stone for the close German-Syrian co-operation in the area of archaeological field studies which is now a 50 year old tradition.