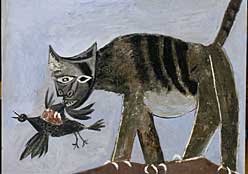 The exhibition is being made possible by the Verein der Freunde der
Nationalgalerie.

On the occasion of the twentieth anniversary of the Musée Picasso Paris, the Nationalgalerie in Berlin is presenting an extensive exhibition with approximately ninety paintings and sculptures as well as more than eighty works on paper, a collection of artworks which encompasses retrospectively all aspects of the creative output of Pablo Picasso. The exhibition may be viewed from September 30 until January 22, 2006 in the Neue Nationalgalerie.

The Musée Picasso in Paris contains the magnificent collection of those artworks, which the artist kept for himself during his lifetime. After Picasso's death in 1973, the works came into the possession of the French state through a donation by the heirs. In 1985 the Musée National Picasso was founded and since then has been housed in the Hôtel Salé, a grand palace from the seventeenth century in the heart of Paris. Today the works constitute the most extensive and significant collection of the universal artist Picasso, who decisively influenced the art of the twentieth century.

From the early works of the Blue and Rose Periods past the pioneering works of Cubism, in which form first came to dominate content, all the way to the erotically charged late works of the artist who in the meantime was almost ninety years old - the exhibition in Berlin presents the brilliant artist from a pronouncedly biographical side. His wives, mistresses and children were his preferred models. He kept many of their portraits for himself as mementos, along with works which seemed to him to have been especially important for his development.

The incredible variety of his formal language is demonstrated by worldfamous paintings such as the classical likeness of his son "Paul as Harlequin" from 1924 and by icons such as the "Head of a Bull" from 1942, which Picasso constructed out of a bicycle seat and handlebars. From the "Self-Portrait" of the twenty-year-old from 1901 all the way to works such as "Reclining Nude and Guitar-Playing Man", which Picasso first painted in October 1970, the viewer is offered a course conducting him through an exhibition which compellingly presents the innumerable transformations and innovations in Picasso's means of expression.

Complemented by numerous photographs from the Picasso archive, the exhibition offers the visitor a wide range of insights into the eventful and variegated life of the twentieth century's predominant artist.