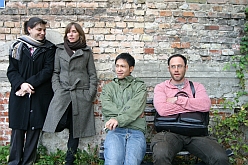 Four artists have been nominated for the 2009 prize who all live in Berlin: Keren Cytter, Omer Fast, Annette Kelm and Danh Vo. Their works will be presented to the public from September 2009 in a joint show in the Hamburger Bahnhof - Museum für Gegenwart - Berlin. After the exhibition has opened a jury will decide on a winner. The prize comes with a sale: one work by the winner of the award is purchased for the National Gallery.