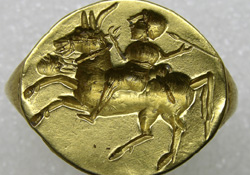 An exhibition of the National Museum in Tbilisi, Georgia

Searching for the Golden Fleece, Jason and the 'Argonauts' sail all the way to the kingdom of Colchis, today's Georgia. The king's daughter Medea, possessing divine magic powers, leads him to the golden skin of a ram, protected by a terrible dragon. The lovers Jason and Medea flee on a huge ship called the Argo.

Archaeologists have discovered the historic origin of this saga near Vani in western Georgia: in the rich graves of a temple city from the 7th to 1st century BC they found astonishing quantities of exquisite gold jewellery. The precious metal, extracted from the Caucasian headwaters, was forged by skilled local goldsmiths to make pieces of great technical perfection and variety. The jewellery found during the excavations of recent years has never previously left the country. We wish to thank the Georgian National Museum in Tbilisi for the opportunity to present these national treasures in Berlin. They will raise European awareness of this beautiful country by the Black Sea with its fascinating culture.