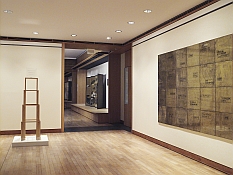 In her newest works, Keiko Sadakane, a concept artist born in Tokyo in 1948 who has lived in Germany since 1973, explores the cultural encounters between Japan and Europe - a topic which is itself one of the leitmotifs of the Museum of Asian Art.

The starting point for the central work of the 'Paravento Regale' show, was the rediscovery of a folding screen from the 17th century that had been broken up into 6 parts and which was found concealed by wall panelling at Eggenberg Castle near Graz in Austria. The discovery is the only known depiction in the form of a folding screen of Osaka Castle before it was destroyed in 1615. Sadakane's wall piece, comprising 33 inscribed, golden, shining brass plates, bears formal reference to the format and the golden ground of the folding screen. In terms of content, the Japanese, Latin, Dutch, German and Portuguese words on the plates create a field of associations which neatly links the cosmopolitan nature of the distant past and the globalized life today (an artist's existence between two cultures). In Castle Eggenberg, this work is to go on display by being paired with the Japanese cabinet, while in Berlin it is placed in dialogue with two folding screens from the museum's collection.

A second work refers to the blue-and-white export porcelain of the 17th century which will be paired in Berlin with a coffee pot that once belonged to the House of Hohenzollern and which as long ago as the 1600s made the arduous journey from Japan to Europe, where it was eventually given new metal fixtures. The third work is a sculptural installation seen as a homage to the great tea master, Sen no Rikyu, who worked in Osaka Castle for the ruling family who resided there. This last piece ties into the facet of our collection concerning the art of tea-making / the tea room.