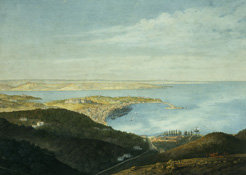 The Kupferstichkabinett is currently engaged in a project, sponsored by the German Federal Ministry of Education and Research (BMBF), that aims to conserve, research, catalogue and digitalize of one the core holdings of its collection, the 'Schinkel Museum'. The project's completion will be marked by a major, interdisciplinary exhibition held in autumn 2012, as well as the long-term preservation of some 4000 drawings and their conversion into a fully illustrated online catalogue.

This exhibition, set up as an 'experiment', containing around 25 core works from Schinkel's first Italian journey (1803-1805), conjures up how Schinkel transformed his impressions of important European buildings, places and cultural centres into historical representations of his own that were to have a lasting impact on his entire later work.