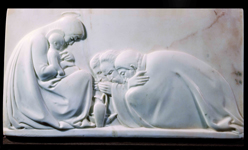 John Flaxman and the Renaissance

The Bode-Museum is to receive John Flaxman's exquisite marble relief with his depiction of the 'Adoration of the Magi' for a year as a loan from an English private collection. This relief, which has only just recently been ascribed as the work of the artist, is one of the few marble works he completed single-handedly and thus pays exceptional testament to his skill as an artist.

John Flaxman (1755-1826), one of the most important proponents of English neoclassicism, was particularly influenced by the Italian Renaissance, a fact to which the relief containing the 'Adoration of the Magi' eloquently bears witness. For this reason, in a small, one-room show, two principle works of the Italian Renaissance, the 'Adoration of the Magi' by Masaccio from the Gemäldegalerie and Donatello's 'Pazzi Madonna' from the Sculpture Collection will be placed alongside the relief by John Flaxman. Insights into how the relief came into being and the artist's creative process are provided in the form of two drawings from the British Museum and a plaster relief from the Sir John Soane's Museum in London.

With his adoration of antiquity, Flaxman bore a great influence on the 19th century. This can be seen in the magnificent Pegasus vase from the Marmorpalais in Potsdam, owned by the Prussian Palaces and Gardens Foundation Berlin-Brandenburg, which originated in the Wedgwood workshops, for whom Flaxman worked from 1775 onwards. His illustrations for the writings of ancient Greece and Dante's 'Divine Comedy' are distinguished by a sense of line that emphasises the contours of figures and has a tendency to abstraction. Works such as these were eagerly received and imitated all over Europe and are represented in the exhibition today with a loan of the 'Divine Comedy' from the Berlin State Library - Prussian Cultural Heritage, together with pages from the Museum of Prints and Drawings in Berlin.

Since the Berlin Sculpture Collection and Museum of Byzantine Art only has few works of English art in its possession, it is welcome news indeed that the relief by John Flaxman is to remain in the Bode-Museum's Neoclassicism Room 258 until the start of 2010.

The exhibition will be incorporated into the regular tours through the collection.