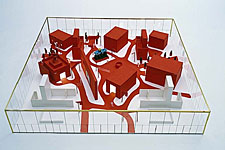 A new exhibition devoted to the work of one of Germany's most significant contemporary artists, Jörg Immendorff, will be on view at the Neue Nationalgalerie (New National Gallery) from 23 September 2005 until 22 January 2006. Born in 1945, the former Beuys pupil has designed a spectacular exhibition landscape for the show: 6 pavilions and a freestanding wall form a playful architectural construction, which is related conceptually to the artist's early designs for a "LIDL city". All of the architectural elements are linked to one another by paths which, in keeping with the individual rooms, are painted signal red.

The cube-shaped spaces accommodate ensembles of works from the artist's various creative periods, which are grouped according to theme. One room, for example, is dedicated to the "LIDL" works from the late 1960s and early 1970s, while another room is dedicated to the famous series "Café Deutschland" (1976-1983). The exhibition also features a selection of the most recent works of the Düsseldorf-based artist.

This exhibition was made possible through the generous support of the Verein der Freunde der Nationalgalerie.