The Friedrichswerdersche Kirche (Friedrichswerder Church), planned and built by Karl Friedrich Schinkel from 1824‒30, has been a museum church and also a branch of the Alte Nationalgalerie since 1987. It offers audiences a unique opportunity to view 19th-century sculpture in an architectural setting from the same era. The original condition of the building has largely been preserved, and the shifting natural light continually reveals new and different facets of the works. Comprising the most comprehensive collection of 19th-century sculpture in the country, the sculptural holdings of the Nationalgalerie occupy a prominent position within Germany’s cultural landscape.

Showcasing sculpture from Schinkel’s era through to the German Empire, the exhibition Ideal and Form traces the medium’s lines of development through the long 19th century into the modern era. It also invites visitors to rediscover the Berlin School of sculpture, a movement whose international outlook was ahead of its time.

With more than 50 sculptures – some monumental in scale – this exhibition provides a comprehensive survey of the work of the Berlin School and of its complex international ties. On display are major works by Johann Gottfried (1764–1850), Emil Wolff (1802–1879) and Christian Daniel Rauch (1777–1857), and by female sculptors such as Angelica Facius (1806–1877), Elisabet Ney (1833–1907) and Anna von Kahle (1843–1920), along with works by the Deutschrömer, including some unique pieces by Adolf von Hildebrand and Arthur Volkmann.

In 1747, as the first ruler of Prussia, Frederick the Great established an official courtly sculpture studio, which would be of great importance for the development of sculpture in Berlin, eventually culminating in what became known as the Berlin School of sculpture. Before Johann Gottfried Schadow, three French or French-trained artists occupied the post of court sculptor, including Jean-Pierre Antoine Tassaert (1727–1788), who was Schadow’s teacher, with the protégé working on Tassaert’s portrait of Mendelssohn. The techniques of working with marble and casting bronze that had been developed in France were viewed as cutting edge at the time, and formed the basis for training local artists.

Between Antiquity and Modernity – Sculptors from Berlin in Rome

According to Johann Joachim Winckelmann, whose writing paved the way for the development of Neoclassicism, an artist’s education was only complete once they had experienced the works of antiquity first-hand. This led to Rome becoming the centre of an international sculpture scene, and a visit to the “eternal city” an obligatory entry in almost every sculptor’s resumé. Some artists, such as Ridolfo Schadow (1786–1822), Heinrich Kümmel (1810–1855) and Emil Wolff spent almost their entire artistic lives in Italy, introducing audiences to classical works and restoring original sculptures, and adapting Classicism’s normative representations of the human figure to their own subject matter, depicting themes that were popular with contemporary audiences. It was not until the turn of the century that Paris went on to become the most important location for the education and training of artists.

Successful Exports – Berlin in England and the USA

While in the early years of the 19th century the dignified appearance of antiquity, with its emphasis on balance and harmony, served as the measure of every composition, from the middle of the century, the sculptors-in-training in Italy increasingly turned their attention to the powerful and dramatically dynamic oeuvres of Michelangelo and Bernini. World’s fairs and international competitions together with the personal proclivities of collectors fostered the spread of German sculpture to England and America. Casts of celebrated works by proponents of the Berlin School such as August Kiss’s (1802–1865) Amazon, or Albert Wolff’s (1815–1892) TheLion Fighter can be found in the US, along with numerous works by the sculptor Elisabet Ney, who emigrated to Texas.

Around 1890, a generation of sculptors associated with Adolf von Hildebrand and Artur Volkmann developed a new approach that departed from the Neo-Baroque drama of their teachers. Moving away from the excessiveness of monumental sculpture, concentrated and reduced forms became their primary focus. Drawing on the recent approaches of a scientific psychology of perception, a group German artists based in Italy produced works of the utmost reduction, both in terms of subject matter and form. At the same time, with the influence of Auguste Rodin, Paris also emerged as a new, leading centre of modern sculpture alongside Rome.

A permanent exhibition at the Nationalgalerie, Staatliche Museen zu Berlin

This exhibition was accompanied by an extensive publication in both German and English.

The Majority of the Staatliche Museen zu Berlin Museums Reopen to the Public on Friday, 21 May 2021

Reopening of the Friedrichswerdersche Kirche on 27 October 2020 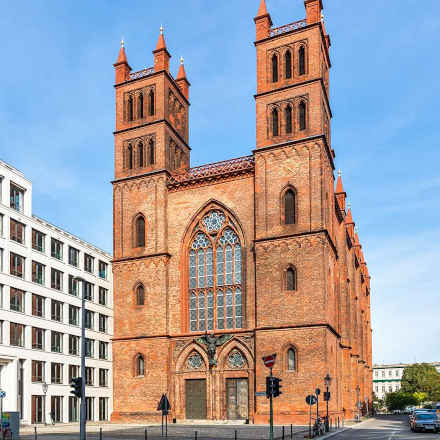