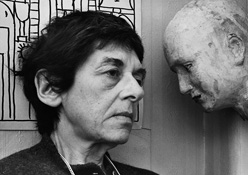 Stern's photographic social study of Chaco, which now features in the Matteo Goretti Collection, was originally initiated by a commission from the Universidad Nacional del Nordeste. Stern's remit, as laid out by the then newly founded museum and archives at the university in Resistencia, was to document the life of the region's ethnic groups. Grete Stern spent a year living in Resistencia (1959-1960), also using it as a base from which to travel to surrounding areas. In the course of the year she took photographs of everyday situations, of craft work, interior shots of houses and portraits. A few years later (in 1964) Grete Stern returned to the Gran Chaco. Today's exhibition in the Ethnological Museum centres around the various places she stopped at on this photographic journey. The historical changes that this region has undergone are made all the more clearer, by the fact that parallel to this exhibition, objects from the Ethnological Musuem's own collection that detail the material culture of Toba, Pilagá, Mocoví and Chiriguano are on also show, dating back to the 1880s.

Grete Stern (1904-1999) was born in Wuppertal-Elberfeld. She first studied at the Academy of Fine Arts in Stuttgart, before moving to Berlin in 1927. She attended Walter Peterhan's photography course at the Berlin Bauhaus (1932/33). It was here that she also met her future husband, the Argentinian photographer Horacio Coppola. In 1934 the couple emigrated, first to London and then to Argentina a year later, where Grete Stern lived until her death.

An exhibition organized by the organizational committee for Argentina's participation as guest of honour at the Frankfurt Book Fair 2010 (Argentinian Foreign Office) and the embassy of the republic of Argentina in Germany, in conjunction with the Ethnological Museum, National Museums in Berlin.

Held as part of the Berlin contribution to the European Month of Photography.