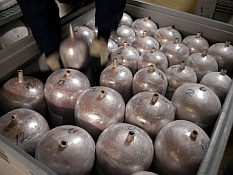 The Doner Kebab "sandwich” was actually invented in Berlin, by a former "guest worker” from Turkey. In Germany this particular fast food has gone from strength to strength ever since, but it has already started conquering the rest of Europe as well.

Berlin alone features ca. 1,600 doner kebab sellers who have long since ceased making their own spits, now mostly procured from professional manufacturers instead. Over the last 20 years the capital has witnessed the flourishing of a veritable doner kebab industry, including supply contractors - to be found in the Turkish Yellow Pages for Berlin-Brandenburg, as are the kebab shop furnishers.
All these entrepreneurs have two things in common: they strengthen our society’s economic backbone and have either immigrated themselves, or have an immigrant background. Experts commonly refer to the services rendered by these self-employed as the "ethnic economy”. The term does no longer denote a mere ethnic niche, as the typical small shops and restaurants have meanwhile been joined by a steadily growing number of medium-sized businesses in the service and export industries, the media and the arts. Given their important contribution to the city’s economic well-being and cultural life they have become indispensable for Berlin as a whole.

These topics will be touched upon in a small workshop exhibition of photographs and selected objects. This exhibition represents the joint contribution of the Museum of European Cultures and the Neighbourhood Museum Association to the EU project "Entrepreneurial Cultures in European Cities” involving museums and cultural institutions from seven countries (www.eciec.eu). It is based on the project "Migration, Work and Identity” (2000-2003) which has also been funded by the EU.