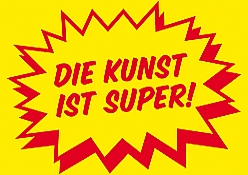 Die Kunst ist super ! (Art is super!) is the title under which the National Gallery at Hamburger Bahnhof - Museum für Gegenwart - Berlin is showing a new presentation of works from its collections. The exhibition uses thematic, monographic and motivic constellations, surprising dialogues and individual appearances rich in associations to cast works from the National Gallery, the Marx and Marzona Collections as well as the Friedrich Christian Flick Collection in Hamburger Bahnhof in a new light. At selected points the museum's collections are complemented by works loaned by artists, some specially created for the rooms at the museum, as well as by loans from the rich collections of Berlin's museum landscape.

Since the early 1960s Fluxus and Happenings, presented on the ground floor of the main building, developed to become international movements seeking to extend and dissolve the boundaries of art as a concept. The artists involved, including Nam June Paik, Joseph Beuys, George Brecht, Allan Kaprow and Wolf Vostell, explored the use of new materials such as objects of everyday life or food products and media such as television or video. Fluxus, a name derived from the Latin word meaning »to flow«, was directed against traditional concepts of art and their approach towards the material. The artists involved in Happenings, on the other hand, sought to provoke new ideas and change audience behaviour with their complex theatrical actions.

On the occasion of the show Die Kunst ist super! the important complex of work by Joseph Beuys is being newly presented in the rooms of the west wing. Unique throughout the world, this collection of works and film documents impressively demonstrates Beuys' efforts to expand the concept of what constitutes art. His provocative sculptures made from unusual materials such as fat and felt and the film recordings of his performances and political actions offer an insight into the totality of Beuys' thinking. For example, the sculpture Das Ende des 20. Jahrhunderts (The End of the Twentieth Century), exhibited here for the first time in its original version, clearly shows the »directional forces« within his utopian thinking which regarded each human being as an artist.

In parallel to the important series of works by Joseph Beuys, the Kleihueshalle is also bringing together major works from the extensive Marx Collection on the theme Vanitas. Vanitas refers to pictorial themes and symbols (like skulls, clocks or mirrors) that recall the transitory nature of all earthly things and caution of the meaninglessness of all striving for riches, sensual pleasure or fame. Questions are raised about the vanity and the glamorous yet simultaneously productive aura of the idol, one of Andy Warhol's central themes. His painting Cagney, which shows the famous screen gangster in a shooting scene, introduces the show and stands as a modern look at Vanitas. The metaphorical aspect of the presentation is strengthened through the dialogues between works of artists as varied as Warhol, Kiefer or Rauschenberg with plaster casts of famous works from the Gipsformerei, Staatliche Museen zu Berlin (Replica Workshop of the State Museums of Berlin).

The main hall is devoted to two large-scale installations centering on the themes of model and reconstruction, illusion and artistic reproduction. Roman Ondák's installation It Will All Turnout Right in the End appears at first glance to be no more than a large box, deposited behind the columns of the side aisle. Yet the simplicity of its external appearance is counteracted as soon as one enters the installation and finds oneself inside a replica of the famous Turbine Hall of the Tate Modern in London. For the installation Waggon the Polish artist Robert Kusmirowski reconstructed a historical goods wagon of the type used in the days of the Second World War as a 1:1 model using simple materials. In this work the artist quite consciously uses a sensory illusion to draw the viewer into an interplay between reality and illusion and between history and the present. These works are accompanied by a work which has shaped the history of twentieth-century art: Bicycle Wheel (Roue de bicyclette) by Marcel Duchamp.

On the upper floor of the main building works by Gerd Rohling, Alfred Keller, Lyonel Feininger, Hans-Peter Feldmann and Jochen Alexander Freydank are assembled under the title Modellversuche 1 + 2 (Model Experiments 1+2). Rohling stages a Kollektion (Collection) of coloured vessels in the manner of valuable antique archaeological finds by exhibiting the objects in cabinets and emphasizing their presence with lighting spots. They are juxtaposed with the naturalistic Insektenmodelle (Insect Models) magnified one hundred times, produced by Alfred Keller during the 1930s, from the Museum für Naturkunde in Berlin. In Schattenspiel (Shadow Play) Feldmann has developed a lively world theatre which captivates the viewer. Feininger's toy town Die Stadt am Ende der Welt (City at the End of the World) allows one to glimpse the artist's quite romantic sense of longing and belonging to those German towns which provided the basis and the motifs for many of his paintings. In addition, Jochen Alexander Freydank's recent Oscar winning short film Spielzeugland (Toytown) is being given its first showing in a museum context.

The contrast between the stingent forms of Minimal Art and the proliferating structure of Gartenskulptur (Garden Sculpture) by Dieter Roth, between the mirror-clad monumental cubes by Isa Genzken and Otto Zitko's lines dancing across the walls are characteristic of the presentation in the Rieckhallen showing mainly works from the Friedrich Christian Flick Collection im Hamburger Bahnhof. Impressive images showing human homelessness such as those by Bruce Nauman or Absalon are juxtaposed with the cosily furnished Heim (Home) by Franz West or Zimmer (Room) by Pipilotti Rist with its giant red seats and TV-set in one of the film rooms on the lower floor.

In an age that has seen supposedly stable systems of values collapse into crisis, their underlying instability laid bare, this new exhibition at the Hamburger Bahnhof presents art as a dependable variable. In all its flexibility and complexity, its creation of fictions and disillusionment of the same, whichever way you look at it: Art is super!