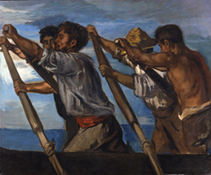 Cult of the Artist: Hans von Marées. A Desire for Community

For Ludwig Justi, then director of the National Gallery, Hans von Marées (1837-1887) was, in his words, "the first great example of the fundamental and complete eschewal of art from the public, of art for art's sake." This appraisal was formed on the back of the rough and dark attributes inherent in his painting and on the general lack of understanding with which it was greeted. It was only at the beginning of the 20th century that the artist was eventually rediscovered. Now, his work is once again championed as a significant, solitary achievement.

This does not go to say, however, that Marées did not strive to make an impact on the wider public, nor that he intently sought companionship with like-minded artists. The months spent working on the frescoes in the Zoological Station at Naples in 1873 were particularly exhilarating for him, as scientists and artists converged there to work on a major project they had largely set themselves. The large-scale studies resulting from this time depicting life in the gulf of Naples will serve as the heart of the exhibition. It was the inherent Gesamtkunstwerk nature of 'Zoological Station' which then in later years deeply impressed artists such as Klee, Beuys and Picasso.

Whereas Marées' work from the 1860s is defined by dreamlike depictions of timeless idylls, the forms in the Naples frescoes and the studies arising from that time are all together more solid, the colours brighter, the vita activa now consorts with the vita contemplativa. The highly formalized pictures of the late period on the whole evoke humanity's more general dreams of such things as the 'Golden Age'. And yet, in everything Marées is always concerned with bringing humankind into harmonious accord with nature. The exhibition on the middle floor spans roughly 100 paintings, sculptures and large scale red chalk drawings.