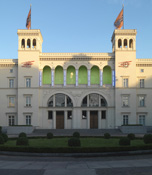 An exhibition of the Nationalgalerie in the Hamburger Bahnhof - Museum für Gegenwart - Berlin. This exhibition has been made possible through the generous support of the Capital Cultural Fund in Berlin.

In autumn 2008 the Hamburger Bahnhof will present a comprehensive solo exhibition of works by Ayşe Erkmen. Taking the spatial features of the museum's architecture as the starting point, the conceptual artist will forge a "path" from the building's exterior to its interior.

Through interventions and installations - including a work specially created for the façade as a prelude - she will interlink the various spaces leading to the actual exhibition site on the first floor of the east wing. She creates irritating situations by staging subtle references to the specific conditions of the exhibition site and the metaphorical associations it evokes. Along with sculptures and large installations, her film oeuvre will be shown.

Born in 1949 in Istanbul, Ayşe Erkmen graduated from the sculpture faculty of the State Academy of Fine Arts in 1977. She took part in the Istanbul biennales of 1989 and 1995 and was invited in 1993/94 to join the Berlin artists programme run by the DAAD. Numerous solo and group exhibitions, for instance in Germany, Sweden and Switzerland (Kuckuck, Kunstmuseum St. Gallen) have followed, while she has also contributed to a number of biennales. Besides her astounding contribution to Skulptur. Projekte in Münster 1997, in 2001 she caused a stir with her Shipped Ships project in Frankfurt am Main, conceived for the Deutsche Bank's art series Moment - Temporary Art in Public Space. In 2002 she was awarded the Maria Sibylla Merian Prize of the Ministry for Science and Art of the Hesse state government. Beginning in 1998 she has taught at the University of Kassel and from 2001 until 2005 was appointed professor at the Städelschule in Frankfurt am Main. The artist lives in Istanbul and Berlin.