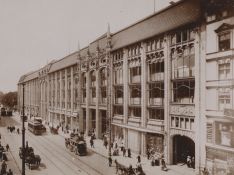 Alfred Messel
Visionary of the City

The architect Alfred Messel (1853-1909) ranks as one of the most important visionaries of modern urban architecture. Marking the 100th anniversary of Messel’s death, the Art Library is proud to present a major exhibition of his work with around 350 exhibits, including: original drawings, construction plans, photographs, models as well as original architectural sculpture for the Wertheim department store and the Pergamonmuseum.

Alfred Messel was the designer of seminal buildings which formed a bridge between historicism and modernism. He built museums, palatial financial buildings, administrative buildings, lavish villas and cooperative apartment blocks - each a Gesamtkunstwerk in its own right for its harmony of external and interior design. His designs for department stores for the Wertheim corporation were unique and are still firmly anchored in the public’s consciousness in Berlin. At the start of the 20th century, the luxurious branch at Leipziger Platz was the largest department store in Europe. In its functionality, size and elegance, it conveyed the metropolitan feeling of a new age like no other building before it. With his plans for the Pergamonmuseum, Alfred Messel also added the important final touches to the 'city of museums’, as Wilhelm von Bode described the Museum Island at the time. The Museum Island has been declared a piece of World Cultural Heritage by UNESCO since 1999.

The exhibition, made possible with financial support from the federal government’s Capital Cultural Fund in Berlin, and the catalogue to go with it have both been created in conjunction with the Museum of Architecture of the Technische Universität Berlin where the estate of Messel’s office is preserved.